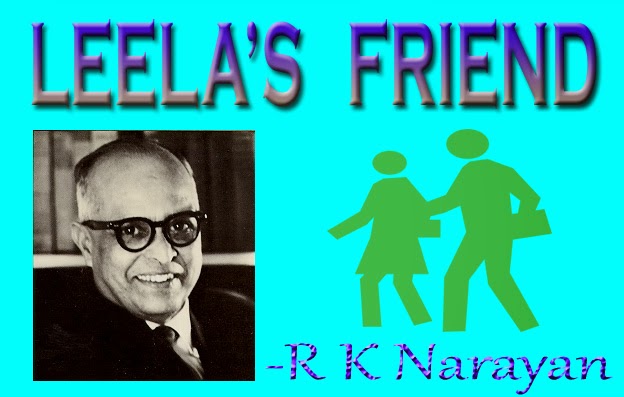 Writer: R K Narayan (1906-2001)
Source: Lawley Road (Originally), but Malgudi Days (Later)
Setting: Probably in the town of Malgudi
Main Characters: Leela, Sidda, Mr Sivasanker and Mrs Sivasanker
Leela: Only child (five-year-old daughter) of Mr and Mrs Sivasanker
Sidda: A servant in Mr Sanker’s household
Mr Sivasanker: A rich man
Mrs Sivasanker: An ordinary housewife
Sidda worked before: in a doctor’s house
Sidda was given by Mr Sanker: Two meals a day and four rupees a month
Sidda had to: Wash clothes, tend the garden, run errands, chop wood and look after Leela
Sidda and Leela played: With a red ball
Leela held a class: For Sidda at dusk
Leela’s box contained: Catalogues, illustrated books and stumps of pencils.
At bed time Sidda used to tell Leela: Incomparable stories of animals in the jungle, of gods in heaven, of magicians who could conjure up golden cstles and fill them with little princesses and their pets.
Sidda slept: Outside the house
Leela accompanied: Sidda when he went out to buy sugar one evening
Leela’s mother noticed: That a gold chain Leela had been wearing was missing when she came home with Sidda.
Sidda was accused of: Stealing the gold chain
A complaint was lodged: By Mr Sivasanker to the police.
Sidda was arrested: Four days later
Ultimately the chain was found inside: A tamarind pot by Mrs Sivasanker
--------------------------------------------------------------------
Links of similar posts:
LEELA’S FRIEND: Latest Questions

ENDEAVOUR
MODERN ENGLISH
GK FOR YOU

Are you preparing for MP(SE) 2020 or HS Exam 2020 ? Get registration for e-Learning to succeed easily. Click Here

I had a long-cherished desire to do something useful for the students specially who are not so strong in English. After a long untiring effort, this blog has been developed for them. Its primary aim is to help them to acquire proficiency not only in the English language but also in the English literature. The topics, in the blog, are explained as far as possible in a simple way keeping in mind their level of understanding. A lot of additional information is also incorporated for the advanced learners.This blog, I think, will act as a real guide to the learners. I shall consider my endeavour amply rewarded if the blog serves the purpose of those for whom it is meant. Any suggestion for its improvement will be gratefully accepted.